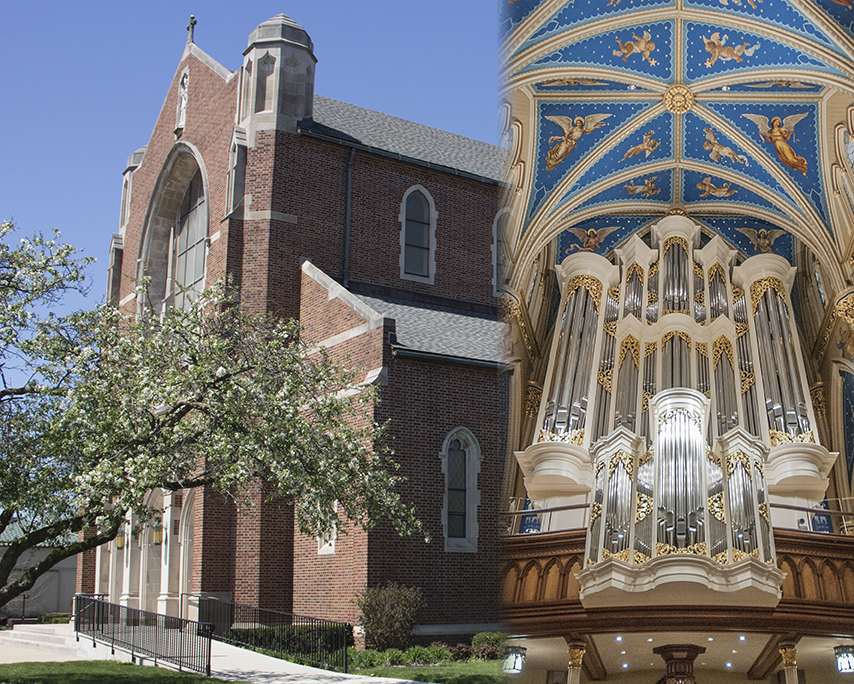 Conference participants arrived in Kalamazoo with accommodations at the Radisson Hotel and proceeded to Saint Augustine Cathedral for Vespers.  The Reverend Thomas McNally, Vice Rector of the Cathedral, celebrated Vespers, and liturgical music was provided by Dr. Fielding and the Cathedral Choir.  Choral music included Unto us is Born a Son, arranged by David Willcocks; Christmas Lullaby by John Rutter; Tollite hostias by Camille Saint-Saëns; Awake and Arise and Hail the New Morn by Dr. Fielding; O Virgin Theotokos, Rejoice by Roman Hurko; Transeamus usque Bethlehem by Josef Ignatz Schnabel; Gesu Bambino by Pietro Yon; and Magnificat by Giuseppe Pitoni.  Mr. Zajac welcomed all conference participants and gave a thorough history of the Cathedral, including its various renovation projects.

The current Saint Augustine Cathedral was dedicated in 1951.  It was designed in the Gothic Revival style by the renowned Boston Architect Ralph Adams Cram and originally served as a parish church in the Diocese of Lansing.  In 1970, Pope Paul VI created the Diocese of Kalamazoo from portions of the Dioceses of Lansing and Grand Rapids, at which time Saint Augustine Church was consecrated the first diocesan Cathedral of Kalamazoo.  The cathedral is home to the 3-manual, 42-rank Nichols and Simpson Organ of 2002.

On Tuesday morning, conference participants gathered for Morning Prayer at the Cathedral.  Prelude music was performed by David Jonies, Associate Director of Music at Holy Name Cathedral in Chicago, IL.  Mr. Jonies played Sonata No. 2 in D Minor, Op. 60, movements 2 and 3, by Max Reger.  Dr. Fielding played all service music for Morning Prayer, as well as Procession by William Mathias for postlude.

Following Morning Prayer, the Reverend Bradley A. Zamora, Director of Liturgy and Instructor in the Department of Liturgy and Music at Mundelein Seminary (Mundelein, IL), delivered a keynote address on the Spirituality of the Cathedral Musician.  Fr. Zamora exhorted conference participants to maintain an active prayer life, since Cathedral musicians are to be disciples.  He also reminded his audience of the distinction between “working for Mass” and “attending Mass” and described his own spiritual enrichment whenever he attends Mass “as a parishioner” in the assembly.

Prior to his appointment at Mendelein Seminary, Fr. Zamora served as Associate Pastor and Director of Liturgy at Holy Name Cathedral in Chicago.  Formerly a parish music director, Fr. Zamora maintains active membership in the National Associations of Pastoral Musicians, the Federation of Diocesan Liturgical Commissions, and the Patron of the Arts in Vatican Museums.

Following the Keynote Address, conference participants returned to the Radisson Hotel for the first of two CRCCM Business Meetings.  Christoph Tietze, Chair of the Steering Committee, led the business meeting and described the nomination and election processes for new members of the Steering Committee.  Scott Eakins, Treasurer, presented the financial status of the organization.  Brian Gurley, Membership Chair, discussed the ongoing efforts to involve new Cathedral musicians in CRCCM, and Marc Cerisier proposed technological options for much needed modernization and automation of membership initiations and renewals.

Following the Business Meeting, conference participants found lunch on their own.

Conference participants then gathered at the Waldo Library Rare Book Room of Western Michigan University in Kalamazoo.  Professor Elizabeth C. Teviotdale, Assistant Director of the WMU Medieval Institute delivered a lecture, titled “The Illustration of the Music of Christian Worship in the Middle Ages and Renaissance.”  Prof. Teviotdale presented a fascinating array of illuminated chant manuscripts and offered possible theological, liturgical, and musical interpretations of the illuminations as paired with their antiphons and feasts.  She also called attention to a trend in manuscript illuminations, in which they became less detailed and less obviously religious in nature.  This trend probably resulted from an increase in the number of illuminations carried out by lay tradesmen and women rather than religious monks and nuns.  Following the lecture, conference participants were able to view selected illuminated manuscripts in the Medieval Institute Library.

Professor Elizabeth C. Teviotdale received her Ph.D. in Art History from the University of North Carolina at Chapel Hill, and her main research interests are early medieval Christian liturgical manuscripts and their illumination, as well as the history of collecting.

Conference participants returned to Saint Augustine Cathedral in the evening for a choral concert performed by the Detroit-based professional choir, Audivi.  Works included Advent Responsory by Richard Marlow; Steh Auf by Christoph Demantius; The Holly and the Ivy, arranged by Reginald Jacques; Lo, how a Rose e’er blooming, arranged by Michael Praetorius; Ave Maria by Robert Parsons; Tota pulchra es à 12 by Heironymous Praetorius; Gloria and Sanctus from the Mass for double choir by Frank Martin; Once in Royal David’s City, arranged by Arthur Henry Mann; Sanctus from Missa Et ecce terræ motus by Antoine Brumel; Away in a manger, arranged by David Willcocks; A Spotless Rose by Herbert Howells; In the Bleak Midwinter by Gustav Holst; Magnificat by Arvo Pärt; Good Christian friends, rejoice, arranged by Charles Winifred Douglas; Hymne à la Vierge by Pierre Villette; and Silent Night, arranged by Malcolm Sargent.  Audivi is a professional vocal ensemble founded in 2013 and based in Detroit.  The ensemble specializes in lesser known Renaissance choral music, but also performs choral music from all eras (www.audivi.net).  For this performance, Audivi was under the direction of guest conductor Dr. Kimberly Dunn Adams, who is Assistant Professor of Music and Director of Choral Activites at Western Michigan University in Kalamazoo.  The concert was presented as part of the Sacred Music at the Cathedral concert series of Saint Augustine Cathedral.

On Wednesday morning, conference participants traveled to South Bend, IN, for a day trip to the University of Notre Dame.  Once on campus, Dr. Paul Thornock conducted an open choral rehearsal in the Dr. Gail L. Walton Rehearsal Room of the Coleman-Morse Building.  The rehearsal repertoire included Sicut cervus and Sitivit anima mea by Giovanni Pierluigi da Palestrina, Come, let’s rejoice by John Amner, and Abendlied by Josef Rheinberger.

Following the open rehearsal and lunch on campus, conference participants gathered in the newly constructed O’Neill Hall for a lecture given by Dr. Peter Jeffery, who discussed chant and psalmody in the reformed [post-conciliar Roman Rite] liturgy.  Prof. Jeffery spoke about the relationship between Gregorian psalm tones and various vernacular adaptations (e.g. Anglican chant, Gelineau and Guimont psalm tones, and Meinrad psalm tones).  He proposed the increased usage of psalmody in Christian sacramental preparation.  For example, psalm refrains—set to music and relevant to any of the Sacraments—could be taught to children and adults.  Upon completion of their formation, the candidates and assembly together could sing the psalm refrains as acclamations within the celebration of the particular Sacrament.

Dr. Peter Jeffery holds the Michael P. Grace Chair in Medieval Studies and is Professor of Musicology and Ethnomusicology at the University of Notre Dame.  He received his Ph.D. in Music History from Princeton University and received a “Genius Award” Fellowship from the John D. and Catherine T. MacArthur Foundation (1987-92).

O’Neill Hall is the new home of the University of Notre Dame’s Department of Music, the Sacred Music Program, the Music Library, and new recital and rehearsal spaces; it is part of Notre Dame’s Campus Crossroads Project, the largest building project in University history.

Dr. Craig J. Cramer is Professor of Organ at the University of Notre Dame.  He received the degree Doctor of Musical Arts and the prestigious Performer’s Certificate from the University of Rochester’s Eastman School of Music.  The concert was given in memory of the late Dr. Gail L. Walton, Director of Music and Organist Emeritus of the Basilica of the Sacred Heart and Initiator of the Basilica Organ Project.

On Thursday morning, conference participants gathered for Morning Prayer at the Cathedral.  Prelude music was performed by Chris Stroh, Principal Organist at the Basilica of Saint Mary in Minneapolis, MN.  Mr. Stroh played the Prelude and Fugue in C Major (“9/8”), BWV 547 by Bach.  Dr. Fielding played all service music for Morning Prayer, as well as Dialogue sur les grands jeux by Louis Clérambault for postlude.

The Thursday sessions continued with the second Business Meeting, during which nominations to the Steering Committee were submitted for the upcoming election.  After the Business Meeting, conference participants found lunch on their own.

After lunch, Marc Cerisier delivered a presentation titled “Technology for the Modern Cathedral Musician.”  He highlighted the value of consistent music engraving and attractive service leaflets as visual aids to liturgical prayer.  Mr. Cerisier then discussed all types of software available for desktop publishing and music notation, and he demonstrated ways to prepare scores for display on tablet screens, as well as MIDI functionality for capturing organ registrations, recording, and playback.

Following the presentation, conference participants enjoyed free time to explore Kalamazoo and later gathered at Saint Augustine Cathedral for Mass.  The Most Reverend Paul J. Bradley, D.D., Bishop of Kalamazoo, was the celebrant and homilist for Mass.  Choral music was provided by the Cathedral Choir, and repertoire included Kyrie from the Missa L’hora passa by Lodovico da Viadana; Soul of Christ by Lance A. Massey (Director of Music at Saint Augustine Cathedral from 1984 to 1988); and Cantate Domino by Giuseppe Pitoni.  Dr. Fielding played all service music for Mass, as well as Prelude and Fugue in E-flat Major (“St. Anne”), BWV 552 by Bach for prelude; and Sonata Eroïca, Op. 94 by Joseph Jongen for postlude.

After Mass, conference participants enjoyed an elegant closing banquet at the Prime Chophouse of the historic Henderson Castle.  Well-deserved appreciation was extended to Thomas Fielding, Francis Zajac, the Cathedral’s administrative staff, sponsors, and the CRCCM Steering Committee for organizing such a successful and enjoyable gathering.

The 2019 meeting of the CRCCM will take place in Seattle, WA, in conjunction with the Cathedral Ministries Conference.  It will be hosted by Saint James Cathedral in Seattle.

As a 501(c)(3) non-profit organization, CRCCM is supported by your contributions in addition to our membership fees.  Your contribution helps us to further the mission of the organization—engaging in dialogue, reflection, deliberation, resource exchange, mutual support, and ongoing professional development for cathedral musicians in particular, and as a model for the Church-at-large.